One of the more chilled out songs in the Megadeth back catalogue, the video for A Tout Le Monde shares the distinction of being banned from being played by MTV (this list also includes tracks by Queen, Madonna, SoundGarden, Primus and Twisted Sister).

But back to the chart. The track starts with 17 bars rest with the drums coming in for the Pre-Chorus. Watch out for the fill leading into the chorus. Depending on the way your kit is set up will depend on how you play it. It was originally played by Nick Menza who used three rack toms and two floor toms. This makes the movement of the fill more natural than two up and two down. This fill comes back in a slightly varied form in bars 75/76 and in a shortened form in bar 93.

Everything about this part to me is musical. The grooves move the song along, the fills are understated and yet supportive of the broader musical structure, even the double kick decorations serve the song. This is a great chart to study how to play perfectly for a heavy song. 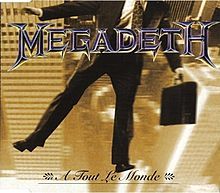